“Run! You need to run!” Raz yelled frantically, thrashing in the dragon’s claws as the beast bore down on her.

Riley stood her ground. The dragon focused on her. She focused on the dragon. She needed to time this…just…right.

Sure enough, it lowered its head, just like she’d seen raptors do in those films. Those movies were really good training on how to deal with monstrous beasts the size of barns. Though she couldn’t get the mental image out of her head of a jeep and a large head with bared teeth in the side-view mirror moving toward her.

Then it suddenly stopped and the world around them changed. They were no longer on the black-rocked plain surrounded by a lava river. Now they were in a canyon. The rock walls appeared around the dragon, caging it in.

Riley smiled at the monster as its head thrashed back and forth, the only part it could move. As it struggled, its claws opened, allowing Raz to fall from the beast’s grip. Luckily, the dragon was leaning forward, so Raz fell to the canyon floor without injury.

He stood there and looked at the bright blue sky overhead. Other than the large, black-scaled beast, it seemed like a peaceful day.

Raz’s wide eyes looked at Riley. “How did you do that?” he whispered.

“Like she said…” Riley nodded toward one of the cliffs above the canyon. They both saw the girl standing there, looking at the world around them. “It’s a dream.”

“Yeah, but it’s my dream. The only person who should have been able to change the environment is me, but I couldn’t. I tried.”

“You know more about this stuff than me.”

Raz nodded. “Okay, and what were you going to do if it didn’t work?” 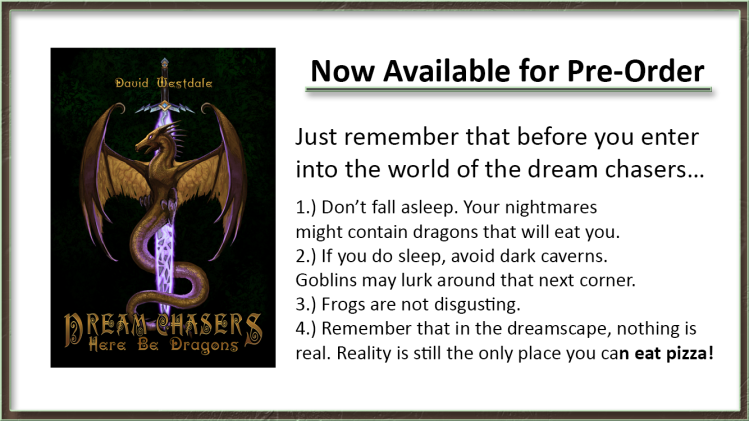 The dragon roared, and they both felt the ground shake. They turned to face it, fear obvious on their faces. The dragon started slamming its long snout back and forth, hitting the walls on both sides. Chunks broke off, and rocks slid down the walls.

Two large, robotic arms burst from either side of the canyon and grabbed the muzzle of the beast. The metallic claws dug in, taking a firm grasp.

The creature was immobilized, unable to open its large mouth or move its body. They had it. They were safe…for the moment.

“Now what do we do?” Riley asked, looking at Raz, who stood gazing up in awe at the creature.

“We kill it!” yelled the girl. They both turned to look up to where she stood.

“And how do we do that?” Riley asked.

“We pierce the brain. Haven’t you ever watched any zombie movies?”

“That’s a dragon, not a zombie,” Riley said.

She pulled a large cylindrical object from behind her back. Riley had no idea where she could have gotten it. The girl pointed it toward them. With a puff of air, an arrow flew out and dug into the rock near their feet, a rope attached to it, making them jump back. They watched as she gracefully slid down the rope.

She jumped off when she was close, then somersaulted to stand in front of them. It was impressive, and Riley felt her mouth open, amazed.

“So you did this?” she asked Riley as she gestured around them. Riley nodded, still unsure of this other girl. She wasn’t sure yet if she would like her or absolutely hate her. The jury was still out.

“Impressive.” She nodded. “Impossible, but impressive.” The girl turned to Raz. “How is that possible?” Before he could answer, she continued. “It’s not. You know it’s not. Did you do it for her? She shouldn’t be able to do this.”

“You were saying it isn’t a dragon?” Riley asked, sensing how uncomfortable the other girl made him.

“Of course it isn’t a dragon.” Raz said, deciding to pay Riley more attention than the domineering girl.

“What? Wait, no.” Riley pointed to the large beast. “Then what else is a large, black-scaled, massive-snout-filled-with-large-teeth-mouth, wings, breathes-fire thing is that?”

“It’s a dream wraith,” Raz said matter-of-factly. Glasses materialized on his face, and even though he was still in his Batman costume, he suddenly looked more intelligent and less like a superhero.

Riley looked at them, her frustration at how they both knew more than she did irritating her. Especially when neither seemed willing to completely fill her in on what was going on. She just caught the dang thing. They needed to at least give her some answers.

“Okay, so what’s a dream-” She didn’t get to finish because the wraith let out a loud, high-pitched shriek.

“Crap. It’s getting ready to change shape,” the girl said.

“Yeah. They shape shift, taking on their target’s worst fears,” Raz said as the girl ran past them, suddenly pulling out another cylinder.

Riley recognized this one. Her jaw dropped as a beam of light shot out from the object and solidified.

“Yeah. It’s why we call her Saber. She kinda has an obsession with them.”

“Give me a boost,” she yelled over her shoulder as she dashed forward. Riley watched her run toward the dragon as the walls around it shook.

The ground beneath Saber quickly rose up like a platform, lifting her as she ran. When she reached the edge, she leapt off, bringing her weapon up and aiming herself directly for the open mouth of the dragon…wraith…whatever it was they wanted to call it.

“What is she doing?”

Raz sighed. “Something stupid. That should be her nickname, but call her that to her face at your own risk.”

Riley looked at Raz, astonished. “Who are you people?”

“We’re Dream Chasers. Which begs the question, how did you get in here without a rig or training?” Raz asked. He sounded bored, but as he looked at her, his eyebrows were raised in question.

They heard a loud crash, then something like an electronic sizzle that sounded like a bug getting caught in a zapper. Her uncle had one of those on his porch. When they visited in the summer, they’d all hear that zap, zap, zap during the night.

They turned in time to see Saber fly over their heads. She slammed into the canyon wall before falling into a heap on the ground.

The dragon roared behind them. Riley ran toward Saber as Raz looked at the beast.

“Yeah. We just need to get away, give her a chance to catch her breath. If it were anything serious, the rig would have pulled her from the dreamscape by now,” Raz explained as Riley leaned down to scoop her up.

“We don’t have to worry about any broken bones or anything?”

The beast shook the canyon with each step. The walls were a tight fit for the creature. It couldn’t run, but each step peeled away more of the rock face, causing rocks, some as big as a bus, to fall around them.

“Maybe this canyon wasn’t such a good idea,” Riley said as she looked around, cradling Saber in her arms. There wasn’t anywhere to go. She tried to change the scenery, rearrange it like before, but every time she tried, there was a stinging pain behind her eyes.

He looked at her, then must have seen her wince because he looked concerned, then waved it off with a nod.

The dragon roared again, causing smaller rocks to fall around them. They hunched their bodies over Saber.

Once the rocks stopped falling, Raz looked at Riley. “Okay, on the count of three, we run. One…”

She waited for Raz to say three, her grip on Saber tight, but three never came. She looked over, but Raz was gone.

Then the world around her faded to white. As she disappeared, she heard the dragon’s frustrated cry. It was enough to tear through the void while the rest of the sounds around her faded into nothing. Everything was silent until she heard a voice she didn’t recognize calling her name.